It has been quiet around Luna 2.0 Fallow for the past couple of days. I know. But that doesn't mean there isn't any work being done. In fact, I have stepped it up a notch. However, unlike my previous work, I'm now focusing on doing the Backstage. I would like to tell you guys a little bit more about that work.

The Backstage for Luna 2.0 will be based on the Backstage as it is in its current form. That is, the design will be based on the current version. As we've gradually worked to build that new interface, we've received a lot of positive feedback on the way we've structured our Backstage. People have told us that it is better then the admin panel from FluxBB because it doesn't put all the options in an illogical order on one page and is simply better designed for being and admin panel, rather than trying to put a forum interface on a place that is supposed to be optimized for management. People also told us that it was much cleaner than other projects - phpBB being pointed out quiet often - and has a nice design across al devices. Honestly though, some of that might be because we simply don't have as much settings as projects like phpBB have. And we've got to thank projects like Bootstrap and Font Awesome also for our design.

So, for the design, don't expect much change. Luna 2.0 will continue to use the current look and feel, through it will get polished even further, of course. We're actually also using a different version of Bootstrap than we use in Luna 1.x. This version has been optimized for Luna and uses a 24 columns-based grid instead of just 12.

Most of our work is gone into rewriting the Backstage as an object oriented system. Settings are now drawn by functions that pass through an array of the setting's context. The result is that the Settings page, that counts 513 lines and 30 kB of code in Luna 1.2, has been reduced to just 314 lines and 17 kB of code. What makes that even more impressive is that the Settings page in Luna 2.0 contains 28 settings instead of the current 25 from Luna 1.2, so its not because we killed of some settings on that page.

But its not all about reducing the size of the Backstage. No, we want to make it even more simple and usable. To do so, we've reordered many of the settings in a more logical order. This includes putting the settings you're probably not going to change that much (Base URL, gzip) to the bottom of the page, and putting all emoticon and BBCode settings together (yep, we finally did it). In fact, we noticed that our settings where scattered around the Backstage so much that we did drop 3 pages from the "Settings" category in the Backstage, and one from "Users" (that are "Registration", "Email" and "Theme" for Settings, and "Permissions" from "Users"). All 4 pages have been merged under the other 4 pages under "Settings" (being "Settings", "Features", "Appearance" and "Menu").

We don't want Luna 2.0 to be just a rewrite of Luna. We want it to be smaller, more compact, easier to extend, but without losing features. There is currently only one feature that will get lost in the transition, and that might be in fact just temporary, and that is the theming engine. Instead, Luna 2.0 will allow you to change the (Less based) CSS within the Backstage. However, for the Backstage, you'll see some things go. For example, the Database backup feature will be dropped, as we've got a feeling that systems like phpMyAdmin are just way more capable at doing that work, and really, what is the point of having such a system ourselves in the first place? We're not here to reinvent the wheel in the database back-up industry. We're here to improve the wheel in the board community industry!

With all this work on the Backstage coming along. We've decided that the first preview for Luna 2.0 will focus on the Backstage only. So basically, Luna 2.0 "Fallow" Preview 1 will contain the old Mainstage and setup systems, but a brand new Backstage (and a couple of new and updated components). We still don't have an ETA on when this is going to get released, but I can tell you that for the coming months, I do have quiet a lot of spare time. 🙂

The new Backstage will provide a lot of new settings. However, the first Preview is all about bringing the Backstage on par with the current version and just rewriting everything that is there right now. For beyond that, this is what I currently plan: Preview 2 will put all the focus on the Mainstage, Preview 3 will focus on everything else (installer, updater, etc.). It's with Preview 4 that we'll start adding new features (through I'm not saying that Preview 1, 2 and 3 won't contain anything new for features) and I'm considering to make you guys drown in settings. Some things I'm looking into is the ability to choose which buttons are shown in the editor for example. And then there are the many, many theme options I'm planning to add too. If there are settings you would like to see, tell me. There is still time to include them in 1.3 (but I'm ramping up the major development for that, so hurry up with that) otherwise it will have to wait for 1.4 LTS or 2.0.

The current works on the Backstage are more on rebuilding what we already have and make it a little bit more user friendly, we're currently not adding new features, that will be for a later development stage and that's also why we're doing this first now: to have a more modern base to build new features on top. Your suggestions are taken into account, though. 😉 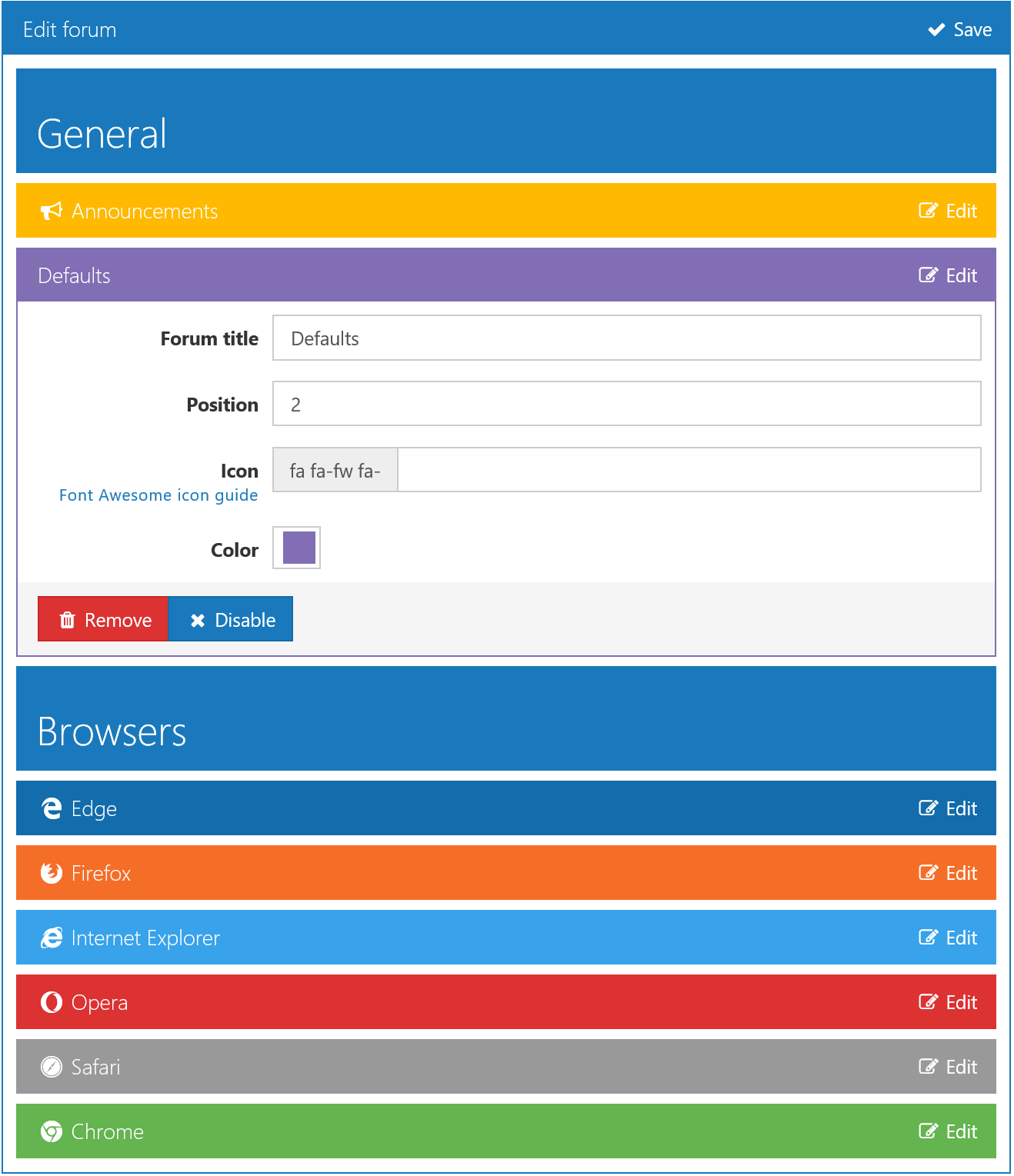 As you can see, it got a major revamp and we're working on improving it further. Some noteable changes are that some of the basic settings like color and icon can now also be changed in here. As you can see, the "position"-setting is still in there, but we're working on dropping that in favor of drag and drop (but it won't be for Preview 1 either).

Today was a good day. Lot's of work has been done.

Well then, a much requested change finally made it into the Backstage. Child forums now have a visual hint at them being childs: 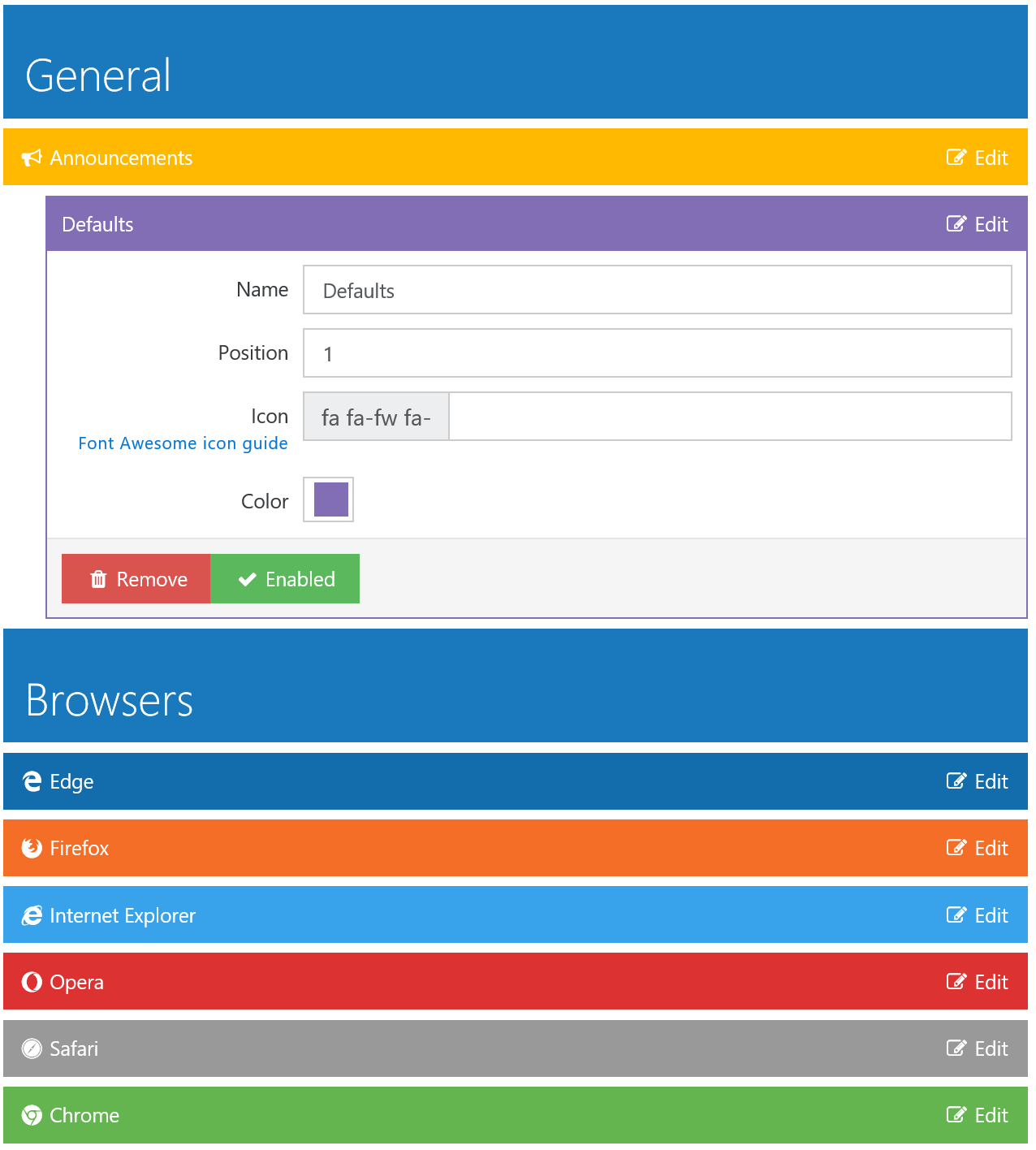 I've made some more progress on the new "Board" page, I've added category management today. Unlike Luna 1.x, you can now edit your categories at the same moment as your forums' basic settings (that are in the cards shown in the earlier screenshots). The category names shown in the above screenshots are now editable and we are - temporarely - displaying a position-input below that title. I'm kinda glad that this is now possible, bot from a UI and UX PoV. 🙂 There is still a lot of work to do on the board page, but this complicated page is almost done. Only the moderation and user pages are more work then this. 🙂

I've got a post for you guys about the new board management page:

I don't see why we would adapt such a design. Are you really going to change the color and icon of your forums every couple of days?

I do not understand the code. I am learning English.

I don't see why we would adapt such a design. Are you really going to change the color and icon of your forums every couple of days?

So I take it you didn't even read the blog post you're commenting on?

Why did you decide so? Probably, my translation is incorrect.

I do not understand the code. I am learning English.

We need to do or Drag-and-drop, or give the opportunity to change the numbers without unfolding.

As you can see, the "position"-setting is still in there, but we're working on dropping that in favor of drag and drop (but it won't be for Preview 1 either).

why is it now fallow again? what happened to emerald?

Please use edit next time around. 😉

No, we're not. In fact, I lost quiet a bit of work after a failure without having a back-up. We're talking March here. At least, that's what I hope at this point. For the first preview that is (obviously). The index page in that screenshot is currently the only page that has been fully restored.

why is it now fallow again? what happened to emerald?

This is just temporarily and might change back to Emerald (this will be decided before the Preview 1 release). The reason is that we'll bump up the system requirements quiet a lot and I might want to use Emerald for another Luna 1.x release for these people left out.